Published in 1982, José Saramago’s Baltasar and Blimunda, is one of the best Portuguese novels of the 20th century. 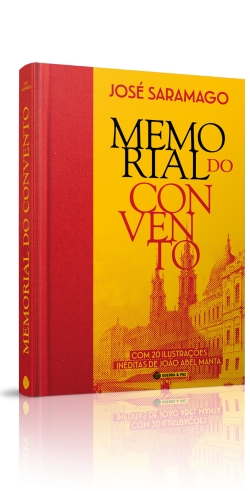 This is an innovative historical novel. Its main character, the Mafra Convent. In it the writer removes himself from a plastered description, favouring the portrayal of an epoch following the style: “Once upon a time there was a king who made promises to raise a convent in Mafra… Once upon a time there was a one-handed soldier and a woman who had special powers… Once upon a time there was a priest who wanted to fly and ended up dying crazy”. Everything is “once upon a time…”, starting with “King. D. João, fifth in his royal name, who will go to his wife, Queen Maria Ana Josefa, and visit her in her chambers. She had arrived more than two years ago from Austria to give heirs to the Portuguese crown, task that had not yet been completed (…). Then, there is this amazing character, Blimunda, who meets Baltasar. Blimunda wandered for thousands of miles, as did the novel, which travelled the world through literature and through music (adaptation into Opera by the Italian composer Azio Corghi). These two characters, Seven Suns and Seven Moons, who lived their love the violent, inquisitorial and gloomy Portugal of King D. João V, will forever remain in our memories.» (in, Diário de Notícias, October 9, 1998)