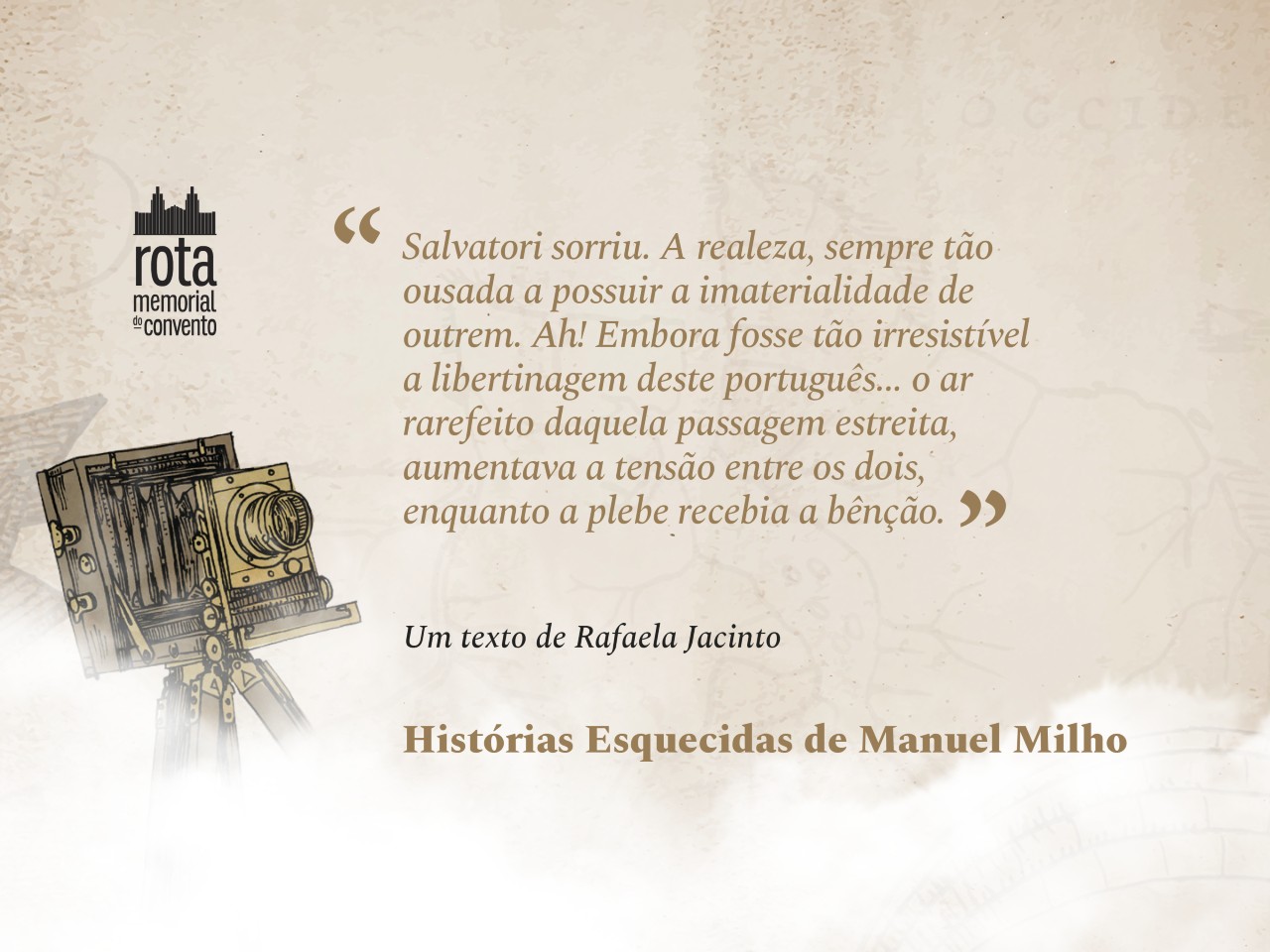 Caught in a Bad Romance

Then he descended his hand through his arched chest, admiring again his tanned skin and drilling he Venetian beard of the rower his with eyes… João repeated Laudes inside himself, in a vain attempt to drive away the wicked wishes, when bells tolled the last call to the court for him to perch at Senhor Jesus da Pedra’s balcony – he touched now, with his whitish fingertips, the scar on the muscly arm of the boatman rowing Galeota Real¹.

The sweat poured through João’s coloured satin vest with glass and metal buttons, temperature blushed his face, revealing the uselessness of the rice powder and the heart throbbing for a man with dark curly hair. Who would tell him a shy one? The richest was never the most powerful… His body was dull with desire, he wanted to stop time, burn Galeota Real, make that heaving, salty chest, his rightful hostage. His trembling hand grasped the Italian man’s neck, whether to harshly, whether to weakly and both lost their strength in the promised of a scandal-kiss.

–  Kiss me! Now! Before my absence is noticed.

Salvatori smiled. Royalty, always so bold possessing other people’s immateriality. Ah! Although this Portuguese man’s debauchery was so irresistible… the thin air of that narrow passage increased the tension between them, with the pleb received their blessing.

– I want a servant that kisses me between Tércia and Noa³, without mea culpa.

There was no possible escape, it was just as if a lion and a gazelle would attract each other without any possible explanation and each bite was a love gesture. Salvatori arrived two months ago, to delight an ascending nobleman, he approached the Iberian coasts with the trade of captive gally-man and occasional lover to the King. They played mother-of-pearl chess, hidden, they stealthily cuddled on their way to Holy Mass and talked about all the women they had wronged. Now the Father⁴ proceeded with the penitential act and Salvatori’s calloused hand surrounded João’s waist. They never kissed, in spite of the King’s nights were feverish guesses. What would be taste of his lips? Dates, clove, pecorino!?⁵

I’m crazy about you, farewell? It couldn’t be true! João went down the stairs in a crazy sprint, put his white silk stockings in the sun, pushed his feet into Ericeira’s sea and burst into tears…His favourite arms were now leaving the Portuguese coasts roaming t shabby and impoverished channels. Inside the bag owned by a succulent Italian mouth’s bearer – a topaz necklace as a gift, a string of hair from a French wig as a souvenir and the promise of a long embrace in a gathering somewhere between the apricots route and a rosewood bed. Tale has it that in the tunnel connecting the royal chambers to the Sanctuary, one can still read, engraved in tears and ink water – “EL REY ET SALVATORI, AMOR VINCIT OMNIA”.⁶

¹ Galeota Real, also known as Galeota de D. João VI, is a small galley, a slender warship propelled primarily by oars, whether having masts and sails or not, used in the Mediterranean from the 16th century until the Modern Age.

² In the name of the Father, the Son and Holy Spirit. (In Latin)

³ Tercia (around nine 9 AM) and Noa (around 3 PM) are Intermediate prayer hours in the Catholic liturgy.

⁴ Father is the name given to a Catholic priest.

⁵ An Italian cheese, made of sheep milk.

⁶ THE KING AND SALVATORI, LOVE CONQUERS EVERYTHING.