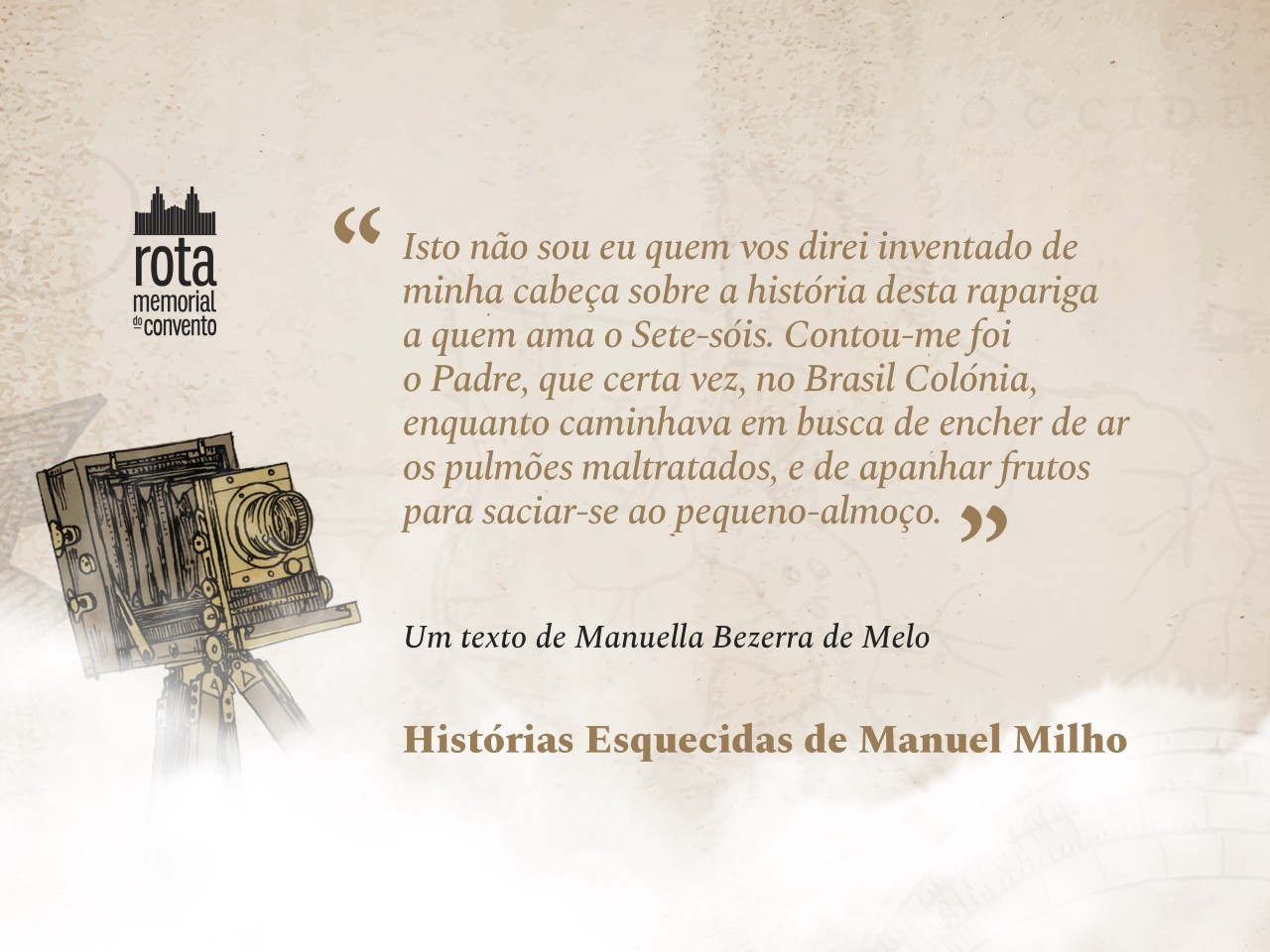 This is not me who is telling you out of my head about the story of this girl Sete-sóis loves. The father¹ told me that, once, in Colonial Brazil, while he was walking seeking to fill his bruised lungs with fresh air, and to pick some fruits to quench himself at breakfast, he had been struck by a shinning fire, that amidst a short mountain while he walked in the woods, got into his throat, his whole body possessed by a heat, and within a millimetric fraction of time, suddenly everything converted into future.

But this story about future it is not a futuristic story, with imaginative and awesome things or alter beings with eyes in their hands and that. It is a different story about future, this father told. In this future where he was there were not things is usually having, it seemed more like having things from the past. And in that past-like future the father would have found Jaime, a man dressed in brown linen pants and a light-blue sweater with small translucid buttons, just as translucid as the steamy vocal sound he produces while speaking:

– I am not sure of that yet. The father would have said.

Jaime closed his eyelids. He made a funny disdain beak with his chops like who knows that doom was not even an existing thing, and that meeting was not even a worthy thing. He scratched his white head with the left hand and sloppily stumbled forward. The father told me he almost laughed; but found it better no to. He got curious and stared at his go.

Jaime was leaving the father at ease, because he strolled softly with his hands holding each other on his back, and one foot after the other, in her leather sandals with his dirty toes showing off over the clay road that led, until that day, the father thought, to nothing.

To nothing because by more often he would look, he could not see anything beyond the road at the centre and forest on the sides. The father looked each side. Anxious, he tried to find across the fire to return to the place where he came from, while Jaime smiled appeased walked softy and looked ahead, where the red clay road ended which, that to be true, never ended, but would in some upcoming moment.

Then the father decided to walk by Jaime’s side. He stepped softly, quickened his step and reached the minister’s side. He made it because there was no one else around there, because he seemed to know where he was roaming, or maybe because that man would inform him of how to get back to fire mountain where I could be crossed again and to feeling warm inside, and then, to come back to his own time.

Jaime would have stopped. And then on a sudden a gate appeared, a wooden gate painted in dark-blue, round on top, with an old chain and a locker informing not all could get inside. Or maybe just the ones willing to take off the chain and opening the locker. This was not clear to the father, but he didn’t ask any question, inclusive because it wouldn’t have to be him to take that chain off, nor breaking the locker. He stood in silence, he waited. He walked into the gate keeping the suspended pace of Jaime’s steps that, despite not having explained if he could het inside, neither did he told him he could not.

The opening of the gate revealed a corridor full of pitanga plants. They caught the eye, a preciousness. Do you know what pitangas are?  On this side one doesn’t no much of those on the other side simply are. I didn’t knew either, until the father explained me in detail. There is nothing like that in the fields of Santarém, not in those of Mafra. He said pitanga plants are the leafy trees where pitangas grow, and pitangas are a red fruit there with no even around here. They can even look like berries but they are different, e and also do not look like cherries, but they can resemble them somehow in shape. They have some welts that look like stars. The father was charmed by them. They were surrounded by red star trees.

Jaime stopped by the side of one amongst all those pitanga plants, grabbed a dozen, small, left some on the father’s hand, that took a good look on them, ate them and made a few faces. Jaime smiled, adjusted his small, rounded glasses with a shiny golden frame, to his face.

– Stars can be sour. The father protested.

– Some will always be sweeter than others. After the first one, one gets used to it, like everything else in life. Jaime answered appeasing the discomfort.

They moved forward aside the trees full of fruit while they ate those sour red stars that by the time being already seamed sweeter until they seen a rose, wide carpet, a house at its end, white with blue windows, wicker chairs in a concrete terrace, some chickens scratching the ground, a small yard with a rose apple.

And it was there, under the rose apple tree, Jaime sat in a rocking chair, forth and back, looking to the father with his glass eyes. Then a little girl crossed the yard running as fast as a rocket, he could almost see her trail in sparks, and seen her jump into Jaime’s lap, biting a rose apple she had grabbed, and they smiled an accomplice smile while the father observed them. The girl, with long dark hair, looked the father in the eye.

– Do you want a rose apple, father? The girl asked.

– No, thanks, much obliged miss. I just came for the fire with will bring me back tom my time.

– Don’t be shy, father. You’re hungry. I can see your wishes, it’s Humankind’s wishes that sustain the stars.

The father open his eyes wide, opened one of the hands where there were still three pitangas. He snapped them at once, chewed them and swallowed the small seeds. With the other hand he slowly took the fruit from the little girls hand. While that Jaime smiled, mocking him. He was the Eter of desire, lighter than the air. The juggle between seeing and not seeing is, in fact, it is the one which is passing.

Now, you imagine, boys, we are working hard here to finish the convent’s building and a little girl comes from inside, staring at you. Would you be afraid of a girl who can see everything about your inner side? What would the little girl see inside each one of you?

The father was afraid, and then had some more joy. The little girl was, after all, his fire.

She would be the one warming him and leading him across back to his time. And so, she did. She grabbed the father’s hand, and then, crossed it.

The father shut his eyelashes hard, but when he opened them again, she was still there. She came to ‘now’ and she is with him since then. On the following seven moons after the crossing, the little girl finally found her seven suns and they gathered, as one, the livings’ wishes. She required fathers help to bless them, and that is why she asked the Eter to bring him, and only then they both planted their souls, yet and despite being dead.