28 penance rituals (autos de fé) were held in Lisbon during the reign of King D. João V, which the King, as well as the royal family, rarely missed. The atmosphere was so festive that the occasion was used as an excuse to organize banquets. The cruel spectacle of watching the death of people being burned at the stake stimulated appetite, which was sarcastically satiated with roast meat dishes.

King D. João V orders the construction of a convent of Franciscans to be built in the Province of Arrábida in the village of Mafra, and dedicated to Our Lady and Saint Anthony

“I, the King, make known that, for just reasons, and for special devotion I have to the glorious Saint Anthony, and to his honour, will grant an alms license so that in the district of Vila de Mafra a convent dedicated to the same saint emerges; it will hold only thirteen monks; with a declaration that the said convent will belong to the province of the religious Arrábidos Capuchins”. (Regian Decree of September 26, 1711). 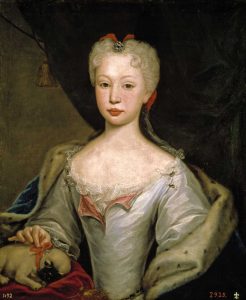 The princess received a thorough education. She spoke French, German and Italian, in all politeness and good manners, and was an appreciable music cultist. On January 10, 1723, the capitulations of the princess’ marriage contract to the prince of the Asturias were granted in Paço da Ribeira. At night there were fireworks in Terreiro do Paço, all the ships docked on the Tagus River were flagged and lit with brilliance, and there were equally bright illuminations throughout the city. The next day, the wedding was held by proxy, at the Patriarchal Church where King D. João V was proxy to as the Prince of Asturias.

Beginning of the first phase of land acquisition for the construction of the Royal Construction of Mafra, on the site called Alto da Vela.

“After having decided that this was the most suitable for the said foundations, we proceeded to the evaluations of the lands that in those sites have several owners, which were carried out on January 21, 1713, in the presence of the Registrar of Mafra, Francisco Corrêa Soares, and the Judge of the land Manoel da Silva, and the Praised Captain José Batalha Leitão, and José Rodrigues da Silva were also present: they will give oath by the Holy Gospels to correctly evaluate what was taken from each of the parties, freeing their conscience; this at the request of the Sindico dos Religiosos the Beneficiate José Soares de Faria, resident in the so-called Villa de Mafra, saying: that His Majesty wanting to found in the term of the Villa de Mafra a Convent to the Arrabidos Religious on Alto da Vela, ordered the evaluations to proceed, this was firstly notified to their owners, or caretakers in order to be present at the said evaluations; and on the same day, mez and anno ut supra will be evaluated the land in the following form: […] and to round off the so called Praised will demarcate with landmarks, which will correspond to the others, and dividing the ground to found the said Convent, with the confining of it, whose demarcation was made on the request of the said Sindico, and religious members, who were present. These evaluations add up to three hundred fifty-eight thousand five hundred.” (Fray Cláudio da Conceição, Historical Office, Tome VIII, Chap. VII, pp. 77 to 82, 1820)

In the same year, on October 24, Prince Dom Pedro, second son of King D. João V and his wife, Queen D. Maria Anna of Austria, who would have been responsible for the succession to the throne of Portugal, was born. Prince Dom Pedro was only 2 years and 10 days old when he died, and according to an account of the time, he died due to peak fever.

The Chrysobull in supremo apostolatus solio by Clement XI was issued 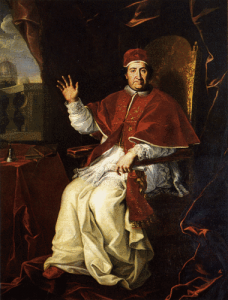 Pope Clement XI, in answer to his services and in accordance with the College of Cardinals in consistory, granted the very special grace that the Royal collegiate chapel of São Tomé in the palaces of Ribeira be elevated to the category of metropolitan cathedral with the title of “Holy Patriarchal Church”. The city of Lisbon and the territory of the diocese were divided into two parts: the patriarchate of West Lisbon with its headquarters in the royal chapel, and the archbishopric of East Lisbon, with its headquarters in the former see of Lisbon. D. José Pereira de Lacerda, bishop of the Algarve, was the executor of the Chrysobull, and handed down the sentence on December 23.

Via the Chrysobull In supremo apostolatus solio Pope Clement XI created the Patriarchate of Lisbon. 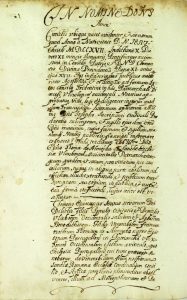 This was the that was so exceptionally granted to King D. João V for having piously responded to the papal request asking for help from the leading Catholic Kings in the war against the Ottoman Turks that constituted a force of permanent danger to Christian Europe and who had seized the islands that the Venetians still owned in the Aegean Sea. In an act of keeping up with the zeal of the Portuguese Kings in defending and spreading the faith, and desires of falling into the good graces of the Pope, King D. João V positively responded to his appeal and thus sent an armada to fight the Turks. In recognition Pope Clement XI elevated the royal chapel to patriarchal basilica dividing the archdiocese of Lisbon in two. An ecclesiastical division was established with two jurisdictions, the archbishopric in the Old Cathedral and the Patriarchate in the royal chapel; and an administrative division that divided the city in western Lisbon, with about 700 streets and two squares, Rossio and Terreiro do Paço; and eastern Lisbon the oldest part contained within the walls.

Notice of the Patriarch’s entry ceremony in Lisbon

The Secretary of State, Diogo de Mendonça Corte Real notifies the Senate to adorn the streets and windows through which the Patriarch will pass when entering Lisbon.

The Secretary of State, Diogo de Mendonça Corte Real notifies the Senate to hold light fixtures for three days when the Patriarch enters the city of Lisbon. In the society of the time, the Baroque Festivals assumed a form of staging power through rituals and codes. Public celebrations marked baptisms, weddings, acclamations, royal entrances, embassies, beatifications, canonizations and other solemnities with civil and religious framework.

Thomas entered Lisbon with majestic solemnity and his entrance was assisted by the secular and regular clergy, the civil status, court procession, troops formed in wings. In the book Ano Histórico, Father Francisco de Santa Maria explains: “the entry started at the church of São Sebastião da Pedreira, the nobility of the court awaited him on horseback. He took the coach and came marching with light accompaniment to the church of Santa Marta; he left, took the Consistorial Cape, continued the march on horseback to the gates of Santo Antão, where the altar stood. He left the Cape, dressed pontifically with the cape and white mitre, and mounted a ruça mule covered with a white canvas gualdrapa (cover), given to his brother D. Luís, Count of Avintes. When leaving through, the councillors of the senates of both chambers of Lisbon received him under a precious canopy of precious canvas and between two wings that formed the regular communities, brotherhoods and brotherhoods of the city, arriving at the Patriarchal Basilica, and the ritual ended with the hymn Te Deum laudamus, sung solemnly.”