Solemn ceremony of the laying of the first stone of the Basilica of Mafra, which gathered numerous crowd and cost, approximately, of 200,000 cruzados.

On November 17, 1717, says Friar João de São José do Prado, the King laid the first stone of the Basilica, and a wooden chapel was built, and was adorned with all pomp and circumstance, occupying area of the cross, among the foundations of the construction, where the day before D. Filipe de Sousa, Chantre of Sé Patriarcal, blessed a wooden cross, which measured 4.80 m, erected in place of the high altar, and which remained there until its consecration in 1730. The solemn ceremony gathered great assistance amongst the court, the First Patriarch of Lisbon, D. Tomás de Almeida, who blessed the foundation stone, and its entourage, a priest of the Society of Jesus, a Provincial and 66 Franciscans of the Province of Arrábida, the parish priests and clergy of the village and parishes of Mafra, the magistrate of the District, the judge and councillors of the municipality of Mafra, an organist, musicians (clarinets and timpani) and singers, a group of cavalry, infantry and the German royal guard, and a large gathering of people from the village and its surroundings.

King D. João V instructs António Rebelo da Fonseca to design the convent fence, ordering: “[…] then wall a great distance of land to Cerca do Convent, and plant in well shared flowerbeds, with dilated streets, all kinds of wild trees, which will come from various parts of the Kingdom, […] and plant vines and vines in all its circumference […]”, including Portuguese laurel, grapevines, rosemary and rose bushes. 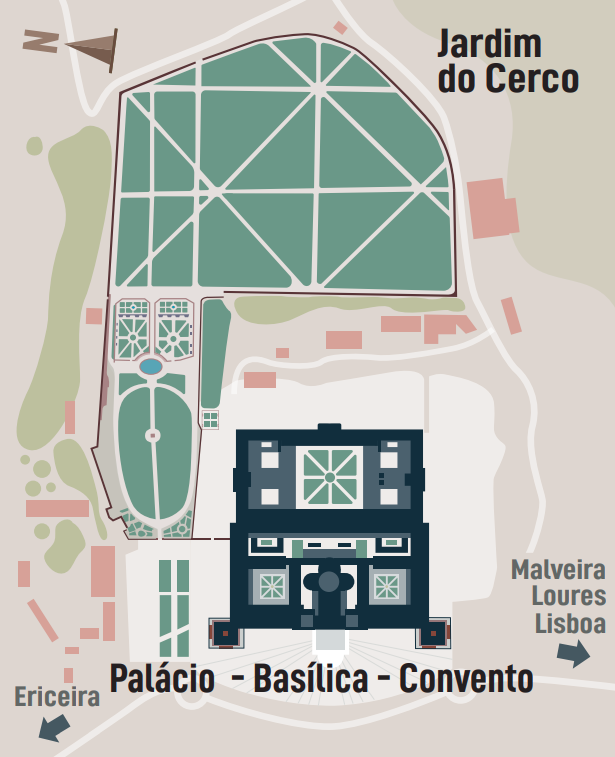 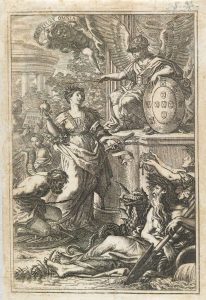 Intellectual training and modernization of teaching as well as other aspects of Portuguese cultural life deserved special consideration behalf of the monarch. The institution of the Academy arose following the creation of Royal Academies in Europe throughout the 18th century. It aimed to write the history of Portugal and its conquests. Its statutes were confirmed by decree of January 4, 1721 and were initially installed in the palace of the Dukes of Bragança. In addition to this, he also created the Academy of Portugal in Rome, with the purpose of training new artistic talents, the astronomical observatory of the College of Santo Antão, the creation of the School of the Seminary of the Patriarchal, which became one of the most important institutions of music education in Portugal and the royal libraries that were endowed with thousands of books acquired abroad.

Institution of the Royal and Venerable Brotherhood of the Blessed Sacrament of Mafra, Royal Building of Mafra.

Commitment of the Royal and Venerable Brotherhood of the Blessed Sacrament of Mafra, with lies in the Royal Building of Mafra, and is the successor of the primitive brotherhood with references of March 14, 1597.

Swiss traveller, Charles Frederic de Merveilleux, states that the Royal Building of Mafra is the “metamorphosis of stone to gold”.

Born in Neuchatel, physician and naturalist, Senhor de la Moloniere, was a Colonel in the French Army. He travelled through Louisiana from 1733 to 1736 and died in Paris in 1741. He was in the service of King D. João V., as a naturalist, travelling through the Iberian Peninsula from 1720 to 1726. He is believed to have been to Portugal four times, two of them before 1723. The text referring to Portugal was published under the title of “Instructive memories about Portugal” in the book The Portugal of King. D João V seen by three outsiders (O Portugal de D. João V visto por três forasteiros, National Library, 1983).

Construction of the Santo Antão do Tojal aqueduct, by the Italian architect António Canevari 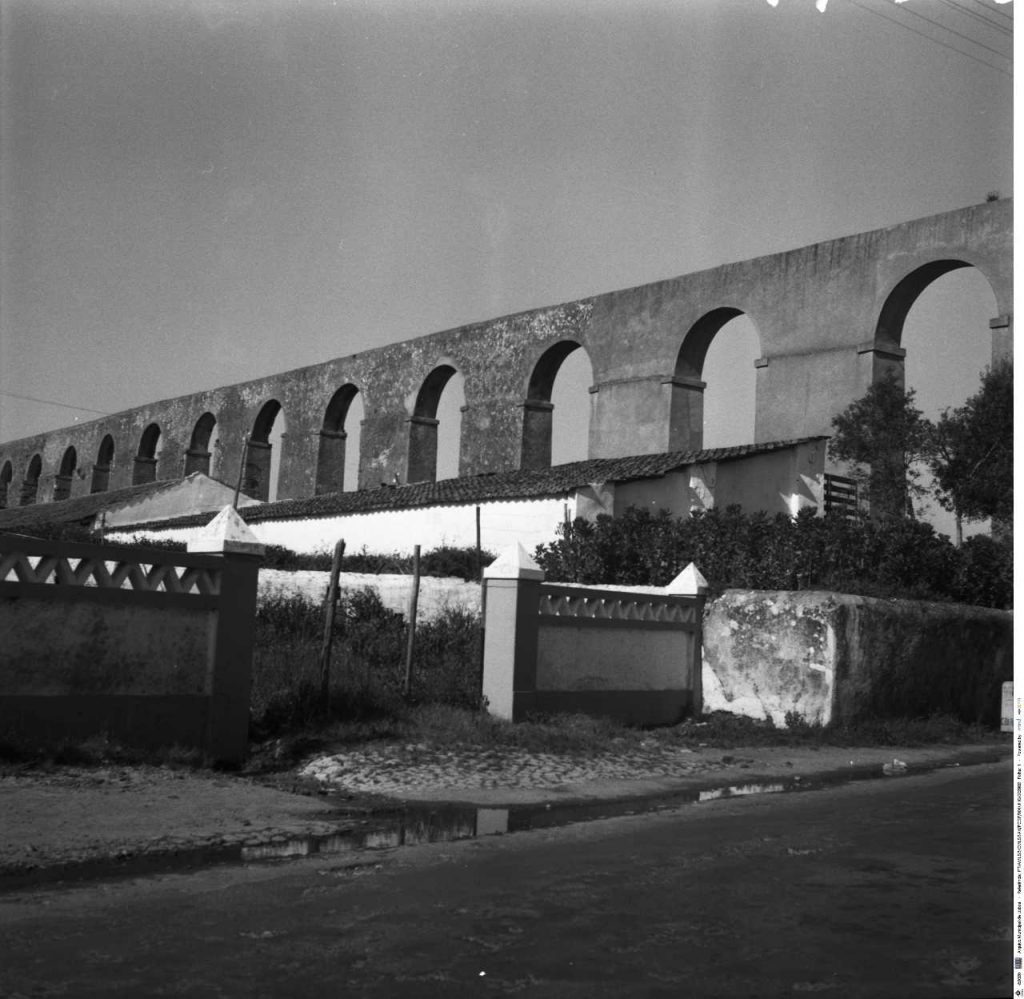 Tomás de Almeida, 1st Patriarch of Lisbon, hired the services of the famous Italian architect António Canevari to build the Santo Antão do Tojal aqueduct, an important example of Baroque architecture. It is recalled that the architect in question was part of the first team sponsored by King D. João V responsible for the construction of the Águas Livres Aqueduct. The Aqueduct of Santo Antão do Tojal is about two kilometers long with an underground segment near its source in Pintéus, and a section uncovered with simple arches upon thick pillars. This construction aimed mainly to feed the magnificent Fountain-Palace, centrepiece of the project that Canevari designed for the entire square at the request of the 1st Patriarch.

King D. João V decided to expand the Convent of Mafra originally designed for 80 monks to 300, “the construction work was very well advanced, and in the part of the fountain, there were dilated orchards and an extensive garden”.

A functional space equipped with all the dependencies and belongings indispensable for the life of a religious community, it was originally designed for 80 monks, but King D. João V decided to extend it to 300, in 1728, “the construction works were very well advanced, and in the part of the fountain, there were dilated orchards and an extensive garden”, in the words of the author Júlio Ivo. Inhabited shortly after the consecration of the Basilica (22-10- 1730) by 210 Franciscans from the Province of Arrábida, in 1744 there were already 342. For 104 years, the Convent of Mafra was alternately occupied by the Franciscans (more or less during 80 years) and the canon regulars of St. Augustine (more or less for 20 years), until the extinction of religious orders in Portugal in May 1834, and was incorporated into the National Treasury.

Order of 58 large statues and 3 low reliefs in white Carrara marble, for the facade and interior of the Basilica of Mafra, which were made in several workshops in Italy. 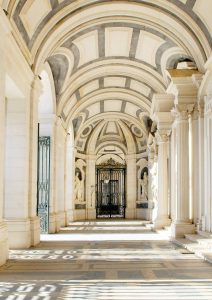 King D. João V made a vast commission of Italian sculpture for the facade and interior of the Basilica, the largest of its time outside of Italy, consisting of 58 large statues and three bas-reliefs, in white marble of Carrara, made in workshops of Rome, Florence and Genoa, by the sculptors Carlo Monaldi, Pietro Bracci, Giovanni Battista Maini, Giovanni Baratta, Agostino Corsini, Antonio Montauti, Baptista Vacca, Francesco Maria Schiaffino, amongst others, during the years 1729 to 1734. Flanking the main balcony of the facade of the Basilica are two of these statues: those of the Patriarchs São Francis of Assisi (Saint Francis of Assisi) and São Domingos de Gusmão (Saint Domin de Guzman).

First references to the construction project of the Águas Livres Aqueduct, whose construction was ordered by King D. João V in 1731

The poor distribution of potable water in Lisbon forced the city to be supplied from springs that existed not too far away. The decree authorizing the Senate of the Lisbon City Council to regulate the goods on which the duty called “Real da Água” would be levied to finance the construction of the Águas Livres Aqueduct was signed on June 20, 1729, so it can be said that the population for the water they started to drink.

Royal Order for the Construction of the Roads to Mafra 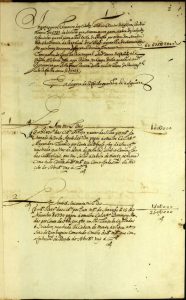 This was a royal order to build the course from Santo António do Tojal to Mafra, and from this village to the district of the city of Lisbon, so that three full carriages could pass. It also ordered all judges of the surrounding courts to lead all necessary food and supplies to the village and quarries of Pero Pinheiro.